Is Samsung looking to replace Android with Fuchsia OS?

Android has been the most dominant smartphone OS over the past several years, controlling close to three-quarters of the global smartphone OS market. Its sheer dominance gives us a sense of irreplaceability to Google, which owns and operates the Android system.

However, we’ve heard rumors’ that Samsung might have other ideas. That they want to break the hegemony of Android, which, according to Stat counter enjoys a 70.74 per cent market share compared to the 28.53 per cent share of Apple’s iOS. No, the Korean giant isn’t thinking of promoting the home-grown Tizen OS.

According to some industry insiders, Samsung might try to replace Android with Google’s Fuchsia OS on its smartphones. Though this transition may take years to complete, the fact that Samsung has contributed to fuchsia’s development gives these rumors’ a modicum of acceptability. And that Google may eventually kill their Android operating system. 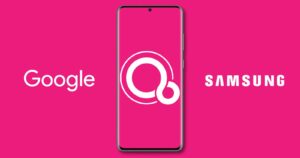 What is Fuchsia OS?

To explain in simple words, it is a common place where Google’s two different operating systems – Android and Chrome OS meet.

It is a simpler operating system built from scratch and is designed to work with varied devices – phones, tablets, laptops, IoT devices and more. Thus, making it easy for different devices to communicate with each other.

Google has been working on Fuchsia OS for some time and only very recently made it public. It is currently powering the Nest devices as well.

Google feels that Fuchsia OS is the futuristic OS that can help it achieve what Apple has done with iOS and macOS. It aims to offer users a seamless app experience regardless of what form factor they are interacting with.

From what we know, the current Android apps will work with Fuchsia OS. It uses a card-based user interface and is loaded with Google’s Material design that we have seen on most Google products off late.

When will Samsung switch to Fuchsia OS?

There is no straightforward answer available at this point. Probably the folks over at Google and Samsung are best placed to respond. Based on what we know at this point in time, even if Samsung decides now, the transition will take years.

Samsung had recently collaborated with Google to launch the Galaxy Watch 4 and ditched its in-house operating system in favour of WearOS. This move will not only help Google garner support for the operating system for wearable devices but will also help Google in the long run when it plans to switch to Fuchsia.

Theoretically, Fuchsia will help Google roll out software updates quickly and easily. Which in turn will help OEM distribute new features and OS on their devices seamlessly. Since Samsung is gung-ho about foldable, Fuchsia OS comes with built-in support for large, screened devices thus reducing the workload of device makers.

Subscribe to our newsletter and never miss our designs, latest news, etc.

Menu
we are shopify partner